Monkey Bank is the 3rd upgrade on Path 2 for Banana Farm in Bloons TD 5. When a Banana Farm gets upgraded to Monkey Bank, the farm becomes a bank controlled by monkeys. The Monkey Bank no longer drops bananas but instead generates money throughout the round, which is placed in its very own "bank account", separate from that of other Monkey Banks.

It costs $3,570 on Easy, $4,200 on Medium, $4,535 on Hard and $5,040 on Impoppable. It generates $450 per round which can be upgraded to $490 and $630 with the More Bananas and Banana Plantation upgrades, respectively. You may withdraw this fund at any time and the bank will hold up to $5,000. In Bloons Monkey City, the capacities and generation is increased by 50%. At the end of each round, the currently stored balance earns TBA% interest.

Monkey Bank holding a sum of money during a few rounds, in BTD5

Monkey Bank holding a sum of money during a few rounds, in Bloons Monkey City 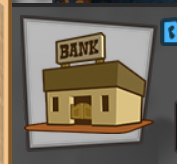 Retrieved from "https://bloons.fandom.com/wiki/Monkey_Bank_(BTD5)?oldid=272541"
Community content is available under CC-BY-SA unless otherwise noted.