6 with Monkey Knowledge
8 with Sharper Darts

The Monkey Ace is a moving unit operated by a monkey that debuted in Bloons TD 4. It also appears in its Expansion, Bloons TD 5, and Bloons 2. In BTD4 and BTD5, it costs $765 on Easy, $900 on Medium, and $970 on Hard. It will automatically fire at the Bloons. When the player places it on the screen, it will automatically fly in a figure-eight form and has infinite Range. However, in BTD5, the player can switch the Monkey Ace's route between an 8 shape, an ∞ (infinity symbol) shape, and an O shape that encircles the runway. The O shape is usually most efficient, as the monkey ace does not move out of the screen (unless you place it near a corner). In BTD6, the Ace was given the option to buy an upgrade to have a centered path that is a circular path that is centered on the middle of the map. It is slightly bigger than the regular O pattern.

The Monkey Ace has accuracy issues due to its wildfire but can become devastating if Bloons fill up the screen, which will make hitting them with the high popping power very easy regardless. Remember to have ally towers cripple the more sturdy threats such as Lead and Regen Bloons, and clean up anything that sneaks through as well.

Monkey Ace makes up to 10 appearances:

Monkey Aces make another appearance here. They pop Bloons that they fly through. The player must pop a Monkey Ace Bloon to give the monkey 2 flags, allowing the player to send them to pop Bloons. If the Monkey Ace hits a wall, it will explode, and the pilot will parachute down. The explosion will not pop any Bloons.
When the Reverse Gravity Bloon is popped, the plane flies upside down, and the pilot parachutes up when it crashes.

In general, Monkey Ace is hardly buffed or nerfed in updates, but is still not very popular early game, due to its frequent missing as a lower-tier tower. However, Monkey Ace can be more useful in combination with other towers, as it does help in reducing the overload of Bloons. Whenever used, most players tend to aim towards purchasing Operation: Dart Storm, in which they could also go towards Ground Zero which could be very useful against MOAB-Class Bloons.

They are extremely expensive so it is not a good choice for early games.

2 aces flying above a monkey city 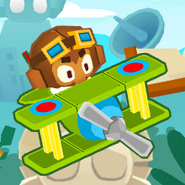