+$10,000 per ability use, straight to in-game cash balance rather than bank account

Monkey-Nomics is the fifth-tier path 2 upgrade for Banana Farm in Bloons TD 6. Monkey-nomics, similar to IMF Loan and Monkey Bank, earns $230 each round and stores it in the bank, this number can be increased by $40 for each top path upgrade for a maximum of $310. Again, just like the IMF Loan's Monkey Bank income function, this bank can hold up to $10,000, but any amount of money can be withdrawn anytime. The bank also earns 15% interest each round, producing money exponentially each round.

It replaces the IMF Loan ability with a new ability. It still earns $10,000, but there's no loan to pay back. The cooldown for the ability is now 60 seconds instead of 90 seconds with no penalty (besides the fact that the ability can only be used two times per round or within 3 minutes whichever comes first, unless sold and rebought). Additionally, the Backroom Deals monkey knowledge affects the ability so that it provides $12,000 instead of $10,000, similar to IMF Loan.

Unlike IMF Loan, Monkey-Nomics's outer walls are made from bricks instead of metal plates, with a darker concrete color and not the teal color of IMF Loan. Monkey-Nomics also has two entrances besides the one at the front, which is the only one who has stairs and yellow stripe shaders above the three entrances. The eight orange windows now are four bigger yellow ones. The banana sign is remade to be a rectangle now and not just a picture of a banana. The roof also has nine windows, three on each side and a yellow stripe flag on top.

Monkey-Nomics, which stores money in its bank account similarly to its preceding upgrades Monkey Bank and IMF Loan, does not have a real targeting priority. Instead, it has different buttons that alter its behavior.

Starting from Version 28.0, all income-based abilities including Monkey-Nomics are capped at 3 minutes per round to prevent infinite income exploits.

Monkey-Nomics excels at providing massive income in later rounds, as it generally takes longer time to progress each round the further the game goes. In some cases in the late-game, it can make even more income than other Bank methods. Additionally, it requires little management to repeatedly tap the ability compared to managing alternate forms of income.

General nerfs to income-related abilities are the most significant to making Monkey-Nomics overall weaker than it did when it was first released into BTD6. Regardless of these nerfs, Monkey-Nomics is still among many viable late-game options at producing large quantities of income.

When the Monkey-Nomics Bank's balance is collected until Version 14.0:

When the Monkey-Nomics Bank's balance is collected since Version 31.0: 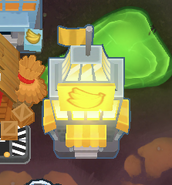 Glowing Monkeynomics that has the EZ Collect or Banana Salvage crosspath

Monkey-Nomics with debt, done by activating IMF Loan ability prior to upgrading 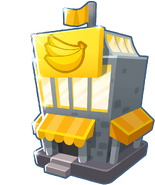 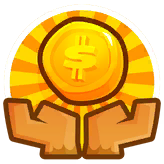