Missile Launcher's main strengths come from its faster projectile speed and attack speed. While not a game-changing upgrade, it is helpful for chasing down faster bloons a bit more reliably. The Missile Launcher upgrade is often used as a crosspath for higher level upgrades in order to maximize the attack speed potential of the Bomb Shooter.

Over history, Missile Launcher gained bonus attack speed to make Path 2 crosspathing more worth approaching. Missile Launcher has overall been buffed since it was first released because of this. 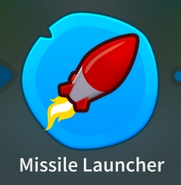 Instamonkey icon for Missile Launcher
Add a photo to this gallery

Retrieved from "https://bloons.fandom.com/wiki/Missile_Launcher_(BTD6)?oldid=285047"
Community content is available under CC-BY-SA unless otherwise noted.