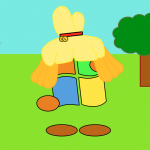 Hello there! Talk to me whatever information that is related to my actions or edits, or simply anything that involve me, as long as they comply with the the official policies. Keep in mind the following:

By the way, if you were ever wondering what my blue gorilla in headphones is, it is a Rare Deedge from My Singing Monsters.