Merchantman is the third upgrade of Path 3 for the Monkey Buccaneer in Bloons TD 6. It allows the Buccaneer to produce $200 per round ($220 with Trade Agreements Monkey Knowledge, +10% per Central Market, up to +100% with ten Central Markets). If a Trade Empire is present, it will gain all bonuses that are granted by that cargo ship, including +$20 income per other Merchantman and +1 damage, +1 ceramic damage and +1 MOAB damage for all of its attacks.

Merchantman allows the Buccaneer to give $200 per round ($220 with Trade Agreements, +10% on top with each Central Market up to 10 times), along with in-built camo detection and longer range from their previous upgrades.

This upgrade changes the Monkey Buccaneer from a standard pirate to a merchantman wearing a turban. The crow's nest remains the same shape and possesses a flag with the same color and shape as the previous tier but smaller. The rest of the boat is made of timber with a lighter shade compared to the original Buccaneer, and there is a tarpaulin cover in front of the merchantman. The per-round income will appear above the Merchantman at the end of each round.

When idle, the Merchantman will occasionally look at his gold coin on his right hand. Sometimes he will toss the coin in the air.

Merchantman targets bloons using the standard target priorities. It shoots darts that are shot in a straight movement. It can also utilize multiple targeting to shoot projectiles from both ends of the boat if it detects bloons on its opposite side.

A Merchantman is a bizarre upgrade for the Monkey Buccaneer, allowing it to gain no active offensive boosts at the benefit of producing $200 each round. This theoretically makes him one of the most varied jack-of-all-trades tower, as the Merchantman can crosspath with Grape Shot and Hot Shot to provide a decent popping power for its cost and Camo Lead popping power respectively.

One of the best assets that the Merchantman provide is in maps that lack high quantities of viable land for Banana Farms. In addition to being good sources of income in water, it has a smaller footprint than the Banana Farm. In their place, a Merchantman can fill the role quite aptly, as well as serving as a defensive asset. Obviously, Spice Islands is one of the best maps for a Merchantman because of this. Other good map candidates also include Spring Spring and Peninsula.

What makes a Merchantman a desirable option is the ease of use and ability to be used as a consequence-free secondary income while simultaneously filling the role of an offensive tower. If a player actively wants a 0/2/2 Buccaneer for early Lead and Camo coverage, a Merchantman can be saved up for and purchased early, paying for the cost of itself during the shorter and less consequential rounds as a viable 0/2/2 Buccaneer still provides basic yet effective defense.

Compared to a Banana Farm, where it provides no offensive benefit and requires a lot of resources to upgrade and focus of the player to constantly pick up bananas, the Merchantman sacrifices raw potential that the further upgrades of a Banana Farm possess at the benefit of a string-free revenue source, akin to the Marketplace upgrade path of said tower.

To purchase one Merchantman at the lowest price will require getting a 0/0/3 Buccaneer. A 0/0/3 Buccaneer will cost the base Buccaneer tower, Long Range, Crow's Nest and the Merchantman upgrade itself, which will provide the cheapest and most direct route for profit. However, this may change under many circumstances, specifically depending on game mode and whether Trade Empire is active or if the player owns a Central Market.

The table below indicates the game mode pricing, as well as the presence of Trade Agreements to indicate two points of Interest, the first is the number of rounds at which the upgrade effectively pays for its own cost and the second where it pays of the entire cost of the tower and subsequent upgrades of a 0/0/3 Buccaneer. These do not consider other Monkey Knowledge such as Advanced Logistics or Military Conscription. Equations regarding addition of Trade Empire and Central Market buffs are dealt with separately.

The effectiveness of Merchantman upgrade remains fairly similar throughout BTD6 history, although now it can gain extra damage when there is a Trade Empire on screen, and the base Merchantman is cheaper due to a slight base Buccaneer cost reduction. 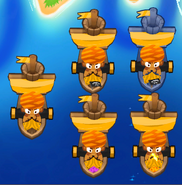 All Merchantman crosspaths (Path 1 at top, Path 2 at bottom) 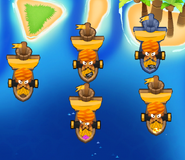 Same as previous image but before the Version 17.0 fire graphics changes (see 0-2-3)

Merchantman with a separate income counter and pop counter 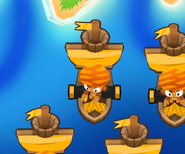 Merchantman holding a coin, as part of its several idle animations 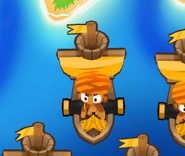 Merchantman tossing a coin in the air, as part of its several idle animations