This mode adds 5 new medals to each track, and each of these appears the same as the one from the normal gameplay, except they appear to have stars instead of monkeys on them. Money and token rewards received from Mastery tracks are doubled.

Also with this update came Monkey Lab upgrades, with the maximum upgrade level increased from level 8 to level 13. Notable among these upgrades is that to tower sell price - it maxes out at the ability to sell towers at 99% of their value.

In this mode, all bloons except Z.O.M.Gs have their rank boosted by one, but cash from popping bloons is halved, along with cash penalties happening sooner, making Banana Farms almost a necessity. Natural Z.O.M.Gs are unchanged. Due to ceramic rushes on rounds 63, 76, 78 and some later rounds being upgraded to a M.O.A.B. rush, it will lag on most low memory devices like iPhones or Androids. Some rounds that contain the deadliest and most dangerous rushes are Round 55, Round 63, Round 76, Round 78, Round 82, Round 83, Round 84, Freeplay Rounds, etc.

Requirement for unlocking are following:

Due to Mastery's main gimmick being strengthened Bloons, you should prepare much earlier for several milestones - Ceramic Bloons arrive on Round 35, there are 7 Camo Leads on Round 37, 4 M.O.A.Bs at the end of Round 40, and a B.F.B on Round 46. Additionally, if playing on any difficulty higher than easy, you must be capable of dealing with a Z.O.M.G on Round 60, and an extremely packed M.O.A.B rush on Round 63, 76 and 78.

Banana Farms are almost essential. More money is required to place powerful defenses earlier in the game - this is best accomplished with several banana farms. Some further tips: 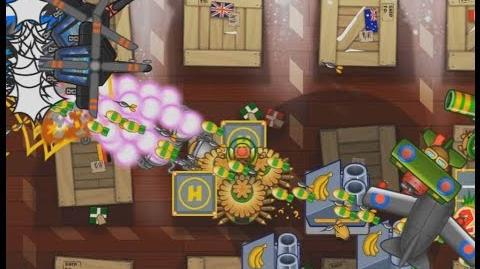 Mastery Mode is Unlocked!
Add a photo to this gallery