Master Bomber is the final upgrade in Path 3 for the Ninja Monkey in Bloons TD 6. The upgrade enhances all of its bombs to become much stronger, especially versus MOAB-class bloons. The new special sticky bombs are shot faster (from every 5.0s to 2.0s) and can be projected from anywhere on screen, dealing 1000 damage instead of 500 damage, and secondary sticky bomb explosions deal 300 damage instead of 100. Not only do its sticky bombs deal extra damage, sticky bombs stun affected MOAB-class bloons for up to 1.0s, while its flash bombs deal 10 damage and stun MOAB-class for up to 0.25s or standard bloons for 1.0s. The Counter-Espionage (0-2-5) crosspath will cause DDTs to lose camo as soon as the Sticky Bomb is attached, the secondary sticky bomb explosion will not remove camo however.

Master Bomber specializes at handling blimps, especially stronger blimps. Unlike Grandmaster Ninja, Master Bomber is somewhat decent on its own, as it provides adequate stunning power versus MOAB-class bloons, although pairing with Shinobi Tactics is strongly recommended just like the former option. Compared to Grandmaster, Master Bomber is superior at dealing with grouped blimps, does not require as much support, but costs a fair bit more expensive overall and its previous upgrade is quite expensive to obtain.

Positioning is far more important for Master Bomber to truly maximize its potential. Unlike Grandmaster, who has a seeking crosspath for its powerful attacks, Master Bomber instead requires a different set of conditions to optimize its anti-blimp power. Ideally, place a Master Bomber where max Shinobi spam can be utilized while also ensuring that the Master Bomber can keep both consistent sticky bomb angles and utilize bends for its blimp-stunning Flash Bombs. And lastly, clear Line of Sight is key, so try letting its infinite-ranged sticky bombs reach as much range as possible while still keeping a low enough range to avoid missing important targets.

Master Bomber has received a price buff, an added stun versus blimps, and extra Flash Bomb damage, and secondary sticky bomb explosions, which all should improve its anti-MOAB potential at a more cost-effective price. 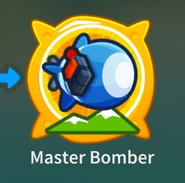 Many Sticky Bombs shot at an infinite range 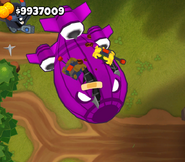 BAD with two Sticky Bombs, one from the original Sticky Bomb, the other from Master Bomber 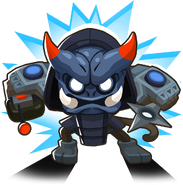 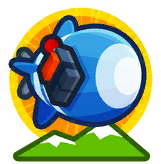