Marketplace is the third upgrade of Path 3 for the Banana Farm in BTD6. It allows all of the farm's bananas to be automatically collected during the round rather than releasing banana bunches. The amount of income produced each round is increased to a total of $320 (+$40 per Path 1 upgrades), in groups of $20 bananas. It costs $2,465 on Easy, $2,900 on Medium, $3,130 on Hard, and $3,480 on Impoppable. As a disadvantage for making the cash gain so simple, there is less produce than either Path 1 or Path 2 Farms.

Marketplace strives for one overall goal in the lineage of Monkey Farm upgrades: string free, hands free income. Ultimately, this allows the player to manage towers, focus on the Bloons and timing of certain abilities, and it makes this the easiest Banana Farm to spam throughout the map. Its income production can now outcompete Banana Plantation, but it still struggles to compete against Long Life Bananas and Monkey Farmers compete with it to alleviate the problem having to collect Bananas constantly for a lower cost in terms of in-game cash. Its worst competitor is Monkey Bank, which has a vastly better return, for only the cost of player interaction every 10+ rounds.

Marketplace produces +4 bananas per round, thereby increasing total income per round ($240 --> $320) 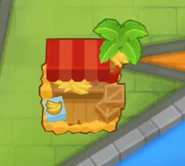 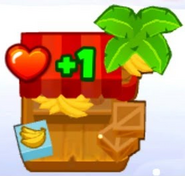 Retrieved from "https://bloons.fandom.com/wiki/Marketplace?oldid=246853"
Community content is available under CC-BY-SA unless otherwise noted.