Maim MOAB is a useful long-ranged option for immobilizing MOAB-class bloons with its stuns. It may have limited stun potential versus groups of blimps, but for its price it not only stuns blimps from an infinite range but it can also deal considerably high damage to them and its children too.

Compared to other stalls, such as MOAB Glue, Bloon Sabotage, and Icicle Impale, Maim MOAB is better against single-target bloons, although opting for the Shrapnel Shot crosspath instead of Even Faster Firing can be effective against grouped blimps especially when positioned carefully. While Maim MOAB isn't nearly as reliable as the other two at slowing down groups of blimps, its infinite range advantage allows it to become an easy and reliable option for stalling.

On higher rounds, especially Rounds 85, 94, 96, 97, and 98, one single 4-0-2 Maim MOAB can almost completely stall in place one ZOMG when set on Strong immediately to Last. This will set the ZOMG far away from the map, leaving it almost completely behind all defenses. This is extremely useful to recharge abilities or specifically synergise with Perma-Spike to create absurdly large spike piles capable of defeating dense rounds.

Outside of that, Maim MOAB is decently powerful during the midgame and extremely helpful against DDTs during lategame by clumping them up when immobilising them.

Maim MOAB was a lot cheaper than its BTD5 functional counterpart when BTD6 was first released. However, with other viable anti-MOAB slowdowns and stuns out there, Maim MOAB simply was once outshined outside simple Perma-Spike stall strategies. It gained some buffs including a price reduction over updates. 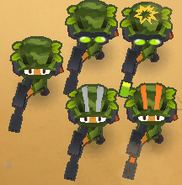