MOAB Shove is the third upgrade of Path 3 for the Heli Pilot in Bloons TD 6. It allows the Heli Pilot to push back MOAB-class bloons (except BADs). When the MOAB Shove touches the hitbox of any MOAB-class bloon, it pushes the first collided blimp backwards. The MOAB Shove effect is more effective against weaker blimps but weaker against stronger blimps. With Bigger Jets, the shove effect becomes stronger. MOAB Shove will also gain an extra rocket attack that deals 1 damage, +2 damage to Ceramics and above, has 10 pierce, and a blast radius of 18.

MOAB Shove allows MOAB-class bloons to become pushed back whenever it is near the Heli Pilot's helicopter. MOAB Shove can only affect one blimp per helicopter and the helicopter shoving effect can only stack once.

Visually, the helicopter gains a large grille on the front of it. Additionally, its side wings now have two green arrows per wing instead of one. The upper rudder is now green instead of grey like the rest of the helicopter.

Official sources give the following as the values for the MOAB Shove, which indicate the speed of the blimps while affected by the shove.

Having multiple MOAB Shoves will not change the amount of knockback inflicted on the same blimp. However, more blimps can be stalled at once if there is more than one MOAB Shove on screen.

MOABs have a few seconds immunity to MOAB Shove after entering the map, and very briefly after coming out of their parents.

MOAB Shove is the cheapest option for stalling MOAB-class bloons in the whole game, but it comes with low overall damage. The main benefit of MOAB Shove comes from controlling where it pushes back MOAB-class bloons. However, it can usually only stall one MOAB-class bloon at a time, so it tends to be outclassed by more reliable options such as Maim MOAB or MOAB Press.

MOAB Shove has the greatest effect on near-permanently stalling early MOABs, but with many other anti-MOAB support options available, its power doesn't scale as much in late-game. Alongside a price cut, it has received a buff to its crosspath interaction with Path 2. Version 28.0 added a missile for MOAB Shove, which both nerfed its extreme mid-game stalling power and buffed its pure damage. 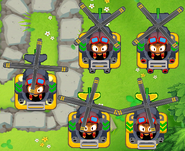 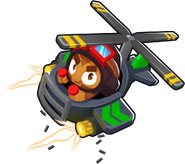 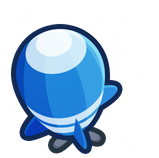