The main body of this Spike Factory is now purple on top, black on the bottom with the two side vents extended upward and sharing the same color scheme; the actual vents are also green, and the main port's teeth are now triangular.

Crosspathing with path 1 adds a red rim along the main port before switching it out for a red main body and orange-yellow flame symbol; the spike piles become visibly denser and then glow white-hot.

Crosspathing with path 2 turns the bottom half, excluding the feet, a light blue, then adds light grey gears on either vent.

MOAB SHREDR retains the increased attack speed of Even Faster Production, and adds +4 MOAB damage to every spike, for 5. It is otherwise identical to its previous upgrade.

MOAB SHREDR defaults on Normal targeting priority, which dispenses the spikes onto nearby bloon track in a semi-sporadical behavior. If given Smart Spikes, it will also receive Close, Far, and Smart.

MOAB SHREDR excels most at MOAB damage, but due to the nature of its attack, it requires time to build up its spikes and specific usage to prevent its spikes from being wasted on bloons, which it deals no extra damage to. This makes it difficult to use to its maximum potential.

Unlike most Spike Factory upgrades, it is often useful to place the MOAB SHREDR near the entrance to deal very high damage against MOABs that are entering the map as there's little to no point stockpiling the spikes due to resulting children.

Therefore, it is generally only used as MOAB damage on rounds where there are not a lot of regular bloons (most notably Round 40, 60, 80, 100, etc.), or as a stepping stone to Spike Storm.

MOAB SHREDR is slightly stronger than it was when it was first released. The slight price drop and MOAB-class damage bonus has helped its performance versus MOAB-class overall. 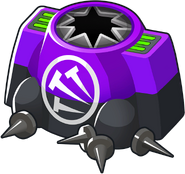 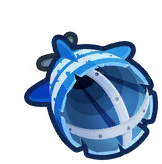