The following is a list of statistics of a Boomerang Monkey with MOAB Press. It includes its base statistics and all associated crosspathing interactions. Expand the box on the right to see further information.

The following are a list of wiki-written damage types associated by a Boomerang Monkey with MOAB Press. These damage type statistics include how it attacks and how these attacks would affect bloons. Expand the box on the right to see further information.

MOAB Press is an extremely powerful tower in the game as its cheap price allows it to be easily tagged on to many defenses. In combination with most other blimp stallers, most notably MOAB Glue, it is able to use its strong pushback and decent damage to support other towers weak against hyperdense rounds. In an strategy with a high number of MOAB Presses, it is possible for it to serve as the main MOAB DPS tower.

The weaknesses of MOAB Press comes from their poor ceramic-popping power, as well as poor popping power versus DDTs and BADs, but usually towers such as 3-2-0 Spiked Balls army or 0-2-5 Permaspike can handle those weaknesses easily and work in tandem to create an extremely powerful strategy.

When it was first released, it formerly had infinite range, which made it unnecessarily powerful for its low cost, but was removed in the first major balance change update. Crosspathing for MOAB Press's special knockback boomerangs had been added in later patches, eventually settling to become centered around pierce-and-knockback bonus for Path 1 and attack rate for Path 2. 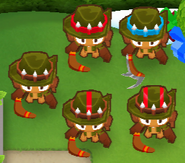 Many 0-2-4 MOAB Presses knocking back ZOMGs in unison, resulting in an extremely stacked knockback 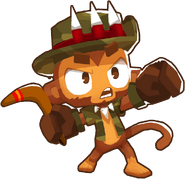 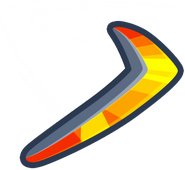