MOAB Mauler (sometimes shortened to Mauler) is an upgrade to the Bomb Shooter in BTD6. This upgrade returns as the third upgrade of Path 2, like in BTD5. Unlike BTD5, it shoots missiles that deal +18 damage to MOAB-class bloons instead of 10 damage, along with +4 damage to Ceramics. It still deals 1 damage to other bloons. Additionally, MOAB Mauler adds +5 range on top of the Missile Launcher upgrade, for a total of 49 range.

The MOAB Mauler is a cheap option to bolster your MOAB defense mid-game. You can choose to use it as your main form of MOAB popping by using many MOAB Maulers, or buy a small amount for support. The latter is usually considered, as many good towers deal well with MOABs already, and it can be quite tedious to buy many MOAB Maulers. Consider using it, especially if when paired with Striker Jones as your active hero.

Base MOAB Mauler range increased from 44 to 49 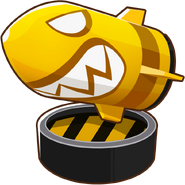 Instamonkey icon for MOAB Mauler
Add a photo to this gallery

Retrieved from "https://bloons.fandom.com/wiki/MOAB_Mauler_(BTD6)?oldid=269586"
Community content is available under CC-BY-SA unless otherwise noted.