For the BTD6 counterpart, see MOAB Mauler (BTD6).
For other uses of MOAB, see MOAB (disambiguation).

In BTD5, it is now the third upgrade of Path 2. When attacking M.O.A.B. Class Bloons, their power increases tenfold.

They also seen to be more essential in BTD4 than in BTD5 as it is one of the very few methods in attacking MOABs efficiently, while in BTD5, there are plenty of other upgrades that are equal to or better than the power of the MOAB Mauler.

In BTD6, this upgrade returns as the third upgrade of Path 2. More information about it can be detailed on this page.

These towers are essential especially late-game, as they are one of the few upgrades that efficiently pop MOABs and BFBs.

They are not as useful against regular bloons when compared to the other path, which is why it may be helpful to have some towers near them as support to have more pop efficiency. However, with the frag bombs upgrades, it'll be able to pop blacks and zebras with ease. A group of them is also more effective than a single Sun God, Robo Monkey, Technological Terror or Ray of Doom when it comes to popping MOAB-Class Bloons & a large enough group of them (a very large group to be exact) can outclass even a maxed Temple of the Monkey God in the same department. Part of this is because they are extremely cost effective, only costing $2850 to get a Bomb Tower to 2/3, whilst providing blistering firepower against MOAB-class bloons whilst being able to hit all bloon types bar camo bloons (courtesy of Frag Bombs popping the black and zebra bloons). MOAB Maulers should be combined with Frag Bombs, as Frag Bombs also help in destroying MOAB Class Bloons. However, it falls short to the power of the 4/2 Bloonchipper, which can suck in ZOMGs. 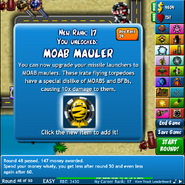 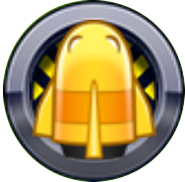 BTD4 upgrade icon
Add a photo to this gallery

Retrieved from "https://bloons.fandom.com/wiki/MOAB_Mauler_(BTD4-BTD5)?oldid=269138"
Community content is available under CC-BY-SA unless otherwise noted.