MOAB Graveyard is a special mission in Bloons Monkey City. In this mission, you have to pop MOABs, BFBs, and ZOMGs. The player receives 30000$ to start. This mission contains three rounds, each exponentionally harder than the last. Additionally, each bloon will be spawned slightly faster.

In the background of the MOAB Graveyard's track, there are three MOABs, the tail of one BFB, one ZOMG, a skeleton of what appears to be Vortex, and a skeleton of an unknown blimp, possibly Bloonarius or the gray hot air bloon from Hot Air Bloon. It may of also been hinting the B.A.D introduced in BTD 6. 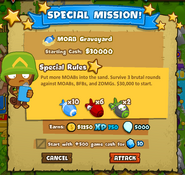 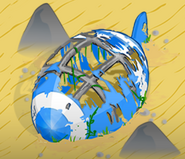 Two MOAB Graveyard tiles next to each other

5000 notice
Community content is available under CC-BY-SA unless otherwise noted.