No (upgradable to x/x/4 via on-track glue blobs)

MOAB Glue is the third upgrade of Path 3 for the Glue Gunner in Bloons TD 6. It allows the Glue Gunner to target and slow down MOAB-class Bloons (excluding BADs and Boss Bloons), slowing them by 37.5% for 12 seconds. MOAB Glue will slow all other bloons by 75% for 24 seconds, similar to its previous upgrade Stronger Glue.

MOAB Glue allows the Glue Gunner to target MOAB-class bloons. Slows MOAB-class bloons (except BADs and Bosses) by 37.5% for up to 12 seconds, and slows other bloons by an identical amount to Stronger Glue. MOAB Glue also detects bloons by a partial hitbox rather than identifying only the centerpoints of each bloon, allowing it to reach slightly further than normal.

MOAB Glue has become a staple of a wide variety of successful CHIMPS runs as a support tower, highlighted by its slowdown attack on MOAB-class bloons without the need of abilities such as Bloon Sabotage, along with the capability of becoming highly discounted via Monkey Commerce. At a relatively low cost, each blob of glue can slow down MOAB-class bloons by 37.5% for 12 seconds, which proves especially useful on DDTs (when provided camo detection). When combined with more powerful attack towers, MOAB Glue becomes significantly more helpful at reducing the bloon speeds of almost any powerful bloon type, helping save money in the long run.

As this upgrade alone is only useful on blimps (MOAB-class bloons), it is usually best used on Rounds 81+, where significant quantities of them spawn at ever so increasing speeds per round. Placing MOAB Glue Gunners near the beginning of the map not too far from the main defense will allow attacking towers to have an easier time dealing with blimps, which will allow the glue to last on blimps within the range of the main defense.

As MOAB Glue serves mostly as a support tower, it does not require much support bonuses, besides camo detection via Radar Scanner. However, it does help to put MOAB Glue in range of Primary Training to allow the gluing of +1 additional bloons so that additional blimps can become slowed. As glue cannot ever soak through blimp layers regardless of upgrades, extra pierce is the most highly valuable asset to become paired with MOAB Glue. Thus, alongside adding Primary Training, it is better off to purchase Path 2 crosspaths for MOAB Glue for the extra pierce rather than dealing insignificant damage-over-time to affected blimps.

MOAB Glue has been nerfed in many updates due to how universal and reliable its slowdown effects on MOAB-class bloons are.

MOAB Glue in the upgrades menu 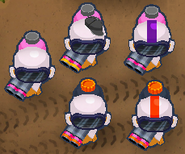 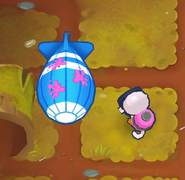 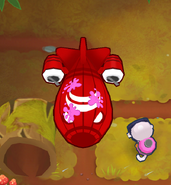 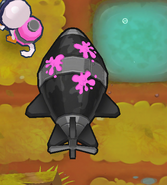 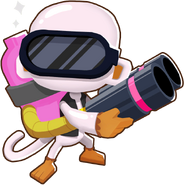 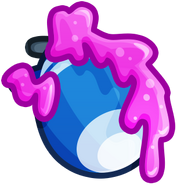