MOAB Eliminator is the fifth-tier upgrade for the Bomb Shooter's second path in Bloons TD 6.

MOAB Eliminator functions similarly to MOAB Assassin, but increases its base damage and activated ability, boosting the ability's damage to 4,500 and reducing its cooldown to 10 seconds instead of 30 seconds, which makes its ability more viable against tougher MOAB-Class Bloons, especially versus ZOMGs and BADs. It also increases the main tower's attack damage versus MOAB-class Bloons to 100 damage per shot. In addition, its main missile attacks can now pop bloons with Black Bloon properties. Camo detection is still required for it to target DDTs either way.

This upgrade is significantly larger than its predecessor, but still retains the black missiles; however the stripe, as well as the fins, and the area beneath the eyes, are all painted green, and it gains a large green target symbol on its forehead.

MOAB Eliminator deals 6x more damage than MOAB Assassin with its ability, for a total of 4,500 (still unable to penetrate MOAB layers) and with a cooldown of only 10 seconds.

It additionally increases MOAB damage to 100 per shot, and the missiles can now pop Black Bloons.

MOAB Eliminator's ability missile is locked on Strong and only targets MOAB-class bloons.

The MOAB Eliminator is amazing at demolishing ZOMGs and BADs with its ability and directly removes Round 100 as a threat. Additionally, it contributes decent damage against MOABs and BFBs with its main attack. However, at a higher cost compared to alternate anti-MOAB abilities such as First Strike Capability on maps with water and Spike Storm on most other maps, MOAB Eliminator often gets outclassed in that manner. Its ability struggles against high density of ZOMGs and even multiple BADs, though most rounds in standard games including CHIMPS normally will not be a problem for MOAB Eliminator's single-target expertise except Round 98 and Round 99. That being said, Striker Jones is the best support with MOAB Eliminator, particularly with his Level 20 Artillery Command ability that both resets ability cooldowns and temporarily doubles damage for all attacks including abilities.

MOAB Eliminator sees the most use in sell-and-rebuy strategies for getting rid of singular high-HP blimps. On CHIMPS, however, where selling is disabled, it sees high usage on Cluster Bombs spam strategies to assist the grouped popping of Cluster spam, paired particularly with Striker Jones for his explosive benefits.

Most of the MOAB Eliminator's balance changes are inherited by those from MOAB Mauler and MOAB Assassin. It has overall been buffed, but only slightly. 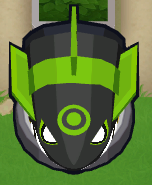 The ability missile is flying 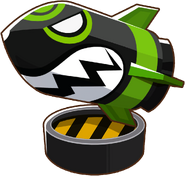 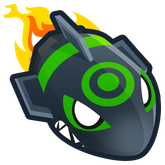