MOAB Domination is the fifth and final upgrade of path 3 for the Boomerang Monkey in Bloons TD 6. This upgrade doubles the range of the special Kylie boomerangs, briefly stuns the affected blimp(s) for 0.25s before knocking them back, and increases damage to 25 per 0.1 second contact, as well as dealing a powerful burning explosion upon projectile expiry. The explosion deals 100 damage and deals a 50 damage per 1s burn for 4 seconds to up to 40 bloons (50 with Glaives), with an explosion radius of 50 (75 with Glaives).

The MOAB Domination upgrade also enhances the main boomerang to deal 12 damage and doubles the attack speed of both the normal attack and the special Kylie attack. Special Kylie attack also can detect blimps blocked by Line of Sight.

This upgrade replaces its hat with a large mohawk and a circlet made of teeth. They have added face paint. The monkey also removes their clothes and wears a cape.

On the official portrait, the MOAB Domination monkey sticks their tongue out, likely for intimidation.

Crosspathing with Glaives adds a set of curved blades to the end of the boomerangs.

MOAB Domination improves the MOAB kylies significantly, causing them to deal 25 damage per 0.1 second contact, stun MOABs for 0.25 seconds before knocking them back.

Upon expiring, the kylies cause a 100 damage explosion with 40 pierce and 50 blast radius, and which inflicts a 50 damage per second Burn effect on affected Bloons for 4 seconds.

The MOAB kylies are also thrown twice as fast, (every 5 seconds) have doubled range, (100) and ignore Line of Sight.

The standard kylies are also improved too, dealing 12 damage and having double attack speed (every 0.6 seconds)

In addition to the path 1 crosspathing interactions inherited from MOAB Press, Glaives grants +10 pierce (50) and +25 blast radius (75) to the explosion.

Like all Boomerang Monkeys, MOAB Domination can access Change Hands secondary targeting priority to switch hands, changing the origin and direction of the boomerangs.

The following is a list of statistics of a Boomerang Monkey with MOAB Domination. It includes its base statistics and all associated crosspathing interactions. Expand the box on the right to see further information.

The following are a list of wiki-written damage types associated by a Boomerang Monkey with MOAB Domination. These damage type statistics include how it attacks and how these attacks would affect bloons. Expand the box on the right to see further information.

The MOAB Domination is a mixed knockback plus damage option, acting as a somewhat mix between a stronger MOAB Press and Blooncineration. Like MOAB Press, MOAB Domination is a strong option at dealing with all blimps other than DDTs and BADs, due to the combined damage and knockback powers of its special boomerangs, but due to the added explosions and damage-over-time effect added to expired special boomerangs it inflicts quite high grouped blimp damage and even handling some of the bloons inside if used correctly. Although stronger versus regular bloons, it still struggles versus Super Ceramics in the late-game unless there are blimps on screen for it to trigger its special boomerangs. MOAB Domination's works really well with the 0-2-5 Perma-Spike + Stronger Stimulant, which handles MOAB Domination's greatest weaknesses.

MOAB Domination's special knockback boomerangs initially had a fast heavy knockback attack style, but has since been nerfed in Version 2.0 after being deemed too powerful by Ninja Kiwi. Afterwards, the MOAB Domination had underwent an extensive period of unusability, or minimal usability at best, until Version 19.0. Since then, it now specializes for combined damage and knockback, as well as added a minor change that allowed the knockback boomerangs to target at BADs (although remains unaffected by knockback). Eventually, its cost got reverted back to $50,000, seeing its new redeemed role as a DPS tower. 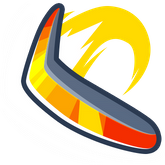