MOAB Assassin (sometimes shortened to Assassin) is the fourth upgrade of Path 2 for the Bomb Shooter in Bloons TD 6. It grants a new ability that fires a missile dealing 750 damage to the strongest non-camo MOAB-class bloon on screen and creates a 3 damage explosion with 100 pierce when the missile explodes, with a cooldown of 30 seconds. Alongside its new ability, its missiles now deal 31 damage to MOAB-class bloons (instead of 16) and 5 damage to Ceramics, while still dealing 1 damage to all other bloons. Additionally, MOAB Assassin adds +5 range on top of the MOAB Mauler upgrade, which in itself has extra range on top of Missile Launcher.

This upgrade retains the same missile base as the preceding upgrades, only this time with a black missile bearing a red stripe around the fins.

Path 1 crosspathing visibly fattens the missile's nose and adds a red stripe around the eyes.

Path 2 crosspathing adds either a red target or explosion symbol on the forehead of the missile.

MOAB Assassin gains the Assassinate MOAB ability, dealing 750 damage to the strongest MOAB on screen (this is unable to penetrate the layer) with a cooldown of 30 seconds. The missile also possesses splash damage, dealing 3 damage to up to 100 bloons.

MOAB Assassin's ability missile is locked on Strong and only targets MOAB-class bloons.

Overall, the MOAB Assassin has been buffed since it was first introduced into the game. Unlike MOAB Maulers, the power of MOAB Assassins has not been amplified to the same extent, but rather it has evolved to become a stronger version of a MOAB Mauler with an activated ability that deals high damage to high-HP single-target blimps. It is not as popular as Maulers, but tags alongside Striker Jones + Mauler spam strategies to utilize Striker Jones' lesser used Artillery Command ability. 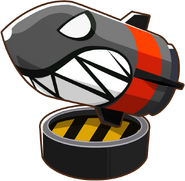