MOAB-SHREDR Spikes (MOAB SHREDR in BTD6) is the third upgrade for the Path 2 Spike Factory in BTD5. It costs $2550 on Easy, $3000 on Medium, $3240 on Hard and $3600 on Impoppable. It makes the spikes produced by the Spike Factory sharper and more dangerous to MOAB class bloons, specifically +3 damage to MOAB-class bloons. In BTD5, this also doubles the attack speed of the Spike Factory, but this upgrade will not increase attack speed in BTD6. In BTD6, however, the lack of increased attack speed is instead compensated with +4 damage to MOAB-class instead of +3.

It takes 10 stacks to pop a MOAB (5 with Bigger Stacks), so each spike does 4 damage to blimps. With Spike Storm, this weapon can be extremely strong. However, do not rely solely on these for taking out MOABs because once the MOAB is popped, the child Ceramics will usually plow through the remaining spikes and make you lose.

In general, Spiked Balls and Spiked Mines are more useful in the early levels, but when MOABs start to show up, these are a must have, due to their final ability being the equivalent of 4 MOAB Maulers. This path is for MOAB-Class Bloons while the other path is for non-MOAB class bloons, meaning that it is best to alternate between Spiked Mines and MOAB-SHREDRs. MOAB-SHREDRs also produce 1.5x as much spikes as a normal Spike Factory with the Faster Production upgrade. 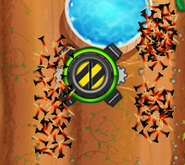 All crosspaths for the BTD6 MOAB-SHREDR (left path 1, right path 3)

0-3-1 Spike Factory
Add a photo to this gallery

Retrieved from "https://bloons.fandom.com/wiki/MOAB-SHREDR_Spikes?oldid=233246"
Community content is available under CC-BY-SA unless otherwise noted.