The MOAB-Class Bloons, also referred as Blimps, are huge Bloons and blimps that tend to be slow, that have very high RBE and require many hits to pop the exterior layer. They also spawn at least 4 Bloons when popped.

Do note that MOAB-Class Bloons can spawn four or more bloons that are below its tier. M.O.A.B.s contain four Ceramic Bloons, B.F.B.s release four M.O.A.B.s, and so on until B.A.D.s, which spawn in two Z.O.M.G.s and three D.D.T.s.

In Bloons TD 6, there are fortified versions of all M.O.A.B. Class Bloons, which means that the layer that the monkeys that are trying to pop require double the amount of hits in order to be popped.

The Mini MOAB only appears in Bloons Super Monkey 2 and the mobile version. The Mini MOAB has an RBE of 150, and after 100 hits, it explodes in a lot of Red Bloons and Yellow Bloons. It is a tiny grey blimp, smaller than the MOAB, with no eye symbols.

The Massive Ornary Air Blimp (aka the "Mother Of All Bloons") was the first M.O.A.B-Class Bloon introduced in Bloons TD 3. The M.O.A.B, having an RBE of 616 (536 in BTD3, and 613 in BTD4), can easily be identified by its blue and white color. Popping M.O.A.B.s takes 200 hits, which then releases four Ceramic Bloons after being popped.

The Brutal Floating Behemoth is the second Bloons TD blimp, making its debut in Bloons TD 4. This blimp can be identified by its red color and white arcs(in BTD4 and 5, the arcs are replaced with a no symbol over a monkey). Having a considerably large RBE of 3164 (2884 in BTD4), the B.F.B. and its descendants can easily push through unprepared defenses. After 700 hits, the B.F.B. releases four M.O.A.B.s.

The Zeppelin of Mighty Gargantuaness, sometimes called the Zoh My God, is the third MOAB Class Bloon that had first debuted in Bloons Tower Defense 5. ZOMGs are huge, sluggish, and extremely resistant Bloons with a whopping RBE of 16,656, taking 4000 hits before releasing four B.F.B.s. This blimp has new properties, being resistant to numerous special abilities, including but not limited to MOAB Takedown Ability and MOAB Assassin, though the MOAB Assassin will do 750 damage. A skull symbol serves as the final piece of decoration for this blimp. An excellent defense is required to pop multiple of these. As of now, the Monkey Sub's First Strike Capability, and Ezili's M.O.A.B hex, as well as the Pirate Lord ability are the only abillities that can destroy a Z.O.M.G. whole (though some bloons may survive the ability). When highly damaged, the skull of the Z.O.M.G. appears cracked and has a bandage over the crack.

D.D.T.s have black and grey stripes throughout. It is encased with metal armor, along with a pair of wings. Its appearance resembles its abilities: Lead, Camo, and Black in BMC Flash, plus its speed, making it a dangerous bloon to unprepared defenses. In BMC Mobile, D.D.T.s do not have the Camo and Lead properties. It also releases four Camo Regrowth Ceramic Bloons after 400 hits. The D.D.T.'s children cannot regenerate back into D.D.T.s with the exception of Bloons Adventure Time TD. Formerly, in Bloons Monkey City, the D.D.T. takes 350 hits before it releases six Camo Regrowth Ceramic Bloons. The D.D.T.'s camo properties can be removed by some upgrades of towers such as the Monkey Sub's Submerge and Support and Wizard Monkey's Shimmer upgrade.

D.D.T.s in Bloons TD 6 tend to appear in groups similarly in Bloons Monkey City. The first D.D.T.s appear in Round 90 or Round 88 in Alternate Bloon Rounds. They also appear around Round 80-90 in Apopalypse mode.The most notable rounds that have significant amounts of D.D.T.s are rounds 90, 95, and 99. After those rounds, D.D.T.s continue being spawned in Freeplay, though only occasionally and not in groups.

The Big Airship of Doom is the fifth non-boss MOAB-Class bloon that first debuted in Bloons TD 6. With a whopping health of 20,000 (40,000 when Fortified) and an RBE of a tremendous 55,760, which is much greater compared to the Z.O.M.G, B.A.D.s are even stronger and more resilient than Z.O.M.G.s. B.A.D.s are insanely powerful as they are immune to even more abilities than the Z.O.M.G, they absorb massive amounts of damage and are immune to all forms of slowing, stunning, and knockback.

Bloonarius the Inflator is a large boss bloon that appears in the Bloonarius event in Bloons Monkey City, BTD5 or BTD6. It is a MOAB Class Bloon and therefore is vulnerable to upgrades that specialize in defeating MOAB Class Bloons. Every time it reaches "skull health", it will spawn deadly bloons. Bloonarius behaves differently in the BTD5 Generation compared to the BTD6 Generation.

In BMC, it has 2000 health, equivalent to half a Z.O.M.G, at level one its health increases with every level you complete. When it reaches a degrade it will release a bloon, the bloon type varies upon which level you are at in the event. Bloonarius is very slow, even slower than a Z.O.M.G. Bloonarius is orange and lime green, with splashes of swamp water splattered upon its hull.

Dreadbloon: Armored Behemoth is the third boss bloon introduced in Bloons Monkey City and BTD5 and in the level 75 of Bloons Super Monkey 2. It appears in the Dreadbloon event. It has similar stats to Bloonarius and Vortex, except it has the ability to give itself yellow stone armor and naturally has lead properties. The yellow stone armor allows the Dreadbloon to become protected under a ceramic layer. Dreadbloon's nose cone resembles a drill.

Blastopopoulos: Demon of the Core[]

Exclusive to Bloons Super Monkey 2, this MOAB-Class Bloon is a greyish blimp with three blue eyes (at the fifth health stage, its eyes turn white). It appears in Stage 3-5 as a boss. Originally, it was covered in Black Bloons, Red Bloons as its eyes, and Glass Bloons as some sort of tentacles. It only breaks after about 10000 hits, and occasionally releases a red trail and "bumpers", balls made of Black and Glass Bloons which will continuously chase the player until completely popped.

Exclusive to Bloons Super Monkey 2, the HM Bloon is a dark grey blimp with 4 holes, and a bloon at the center covered in electricity (by some players called Lightning Shielded Bloon), which can't be popped, and releases a flame at the bottom. It appears in Stage 5 as the boss. It breaks after about 15000 hits. While damaging it, it spawns gears of Lead Bloons and balls of Black Bloons coming out from its holes. Despite being made of metal, it can still be damaged by sharp projectiles. While its getting damaged, it can spew out random bloons, particularly Shielded Bloons and Phasing Bloons.

All of the M.O.A.B. Class Bloons in BTD6, including the fortified versions 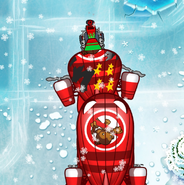 The B.F.B.s got stunned after the parent bloon gets popped with Al's Custom Chippers.