The M.O.A.R. Glaives wears a light gray hood with a dark gray X on it, dark gray gloves, and a light gray cape. The Portrait artwork shows the cape to be in the air with two other glaives, with the monkey about to throw a glaive.

Crosspathing with path 2 gives the monkey red gloves and colors the stripes, and the glaives, yellow with orange lining.

M.O.A.R. Glaives attacks twice as fast, for an attack cooldown of 0.6 seconds, doubles glaive pierce, for a total of 100, and massively increases the ricochet distance from 62.5 units to 187.5 units.

Like all Boomerang Monkeys, MOAR Glaives can access Change Hands secondary targeting priority to switch hands, changing the origin and direction of the boomerangs.

The following is a list of statistics of a Boomerang Monkey with M.O.A.R. Glaives. It includes its base statistics and all associated crosspathing interactions. Expand the box on the right to see further information.

MOAR Glaives is an extremely powerful tower against bloons. It is generally best paired with an anti-MOAB attacker midgame, such as Arcane Spike or MOAB Mauler. Although it begins falling out of favor late game, it can still do fair chunks of damage to hyperclumped superceramics.

Its biggest problem in the current state of the game is that it is outclassed by Recursive Cluster, at least most of the time.

Minor changes for the upgrade alone, inherited from Glaive Ricochet. However, 4-0-2 crosspath is a more viable option thanks to the Red Hot Rangs damage buff. 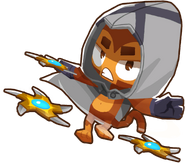 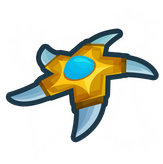