M.A.D (MOAB Assured Destroyer, mostly abbreviated as MAD) is the Tier 5 upgrade of Path 2 for the Dartling Gunner in Bloons TD 6. Its much larger missiles now deal extreme damage to MOAB-class bloons (3 damage to bloons and +550 extra damage to MOABs). However, it attacks much slower and missile shots alternate between each arm, reducing its overall accuracy. It fires missiles every 0.4s alternating between each arm, and each missile has 12 pierce each and explodes up to 6 times due to its multi-explosion mechanic.

In addition, the M.A.D improves its Rocket Storm ability further, shooting 15 waves of larger missiles for 8 seconds, with 0.5s between each wave, and allows each rocket storm missile explosion to damage up to 18 bloons instead of 8. Every ability missile deals 5 damage per missile, but also deals 9 Ceramic damage and 23 MOAB-class damage, which cleans up both Super Ceramics and MOAB-class quite effectively.

M.A.D customly aims based on direction and angle of where the Dartling points towards, and uses alternating targeting to shoot missiles between each arm. It shoots straight movement projectiles controlled in a aim-based mobile style guided by touch-based mobility, albeit with some erratic angular deviation.

Ability rockets not only have erratic angular deviation, they also erratically move in a serpentine motion as they travel through the air.

The M.A.D is extremely effective at demolishing MOAB-class bloons. Even a single hit to MOAB-class bloons can fully eliminate the layers off MOABs and DDTs, (that is, before freeplay ramping) and it can quickly destroy much stronger bloons, even BADs.

On the opposite side of the spectrum, it is much, much weaker versus regular bloons, due to its much slower attack speed, even to the extent that its main attacks are weaker than Hydra Rocket Pods versus anything that is not a MOAB-class bloon. In a real game, pair a M.A.D with good counters to Super Ceramics or anything that doesn't have great MOAB-Class damage with the some examples being Prince of Darkness, The Bloon Solver, The Biggest One, and Ray of Doom.

Where there are excessive amounts of cash, the M.A.D is a good option to speed up the process of anti-stalling for purposes of quicker Round 100 Insta Reward runs, because of its extremely high MOAB-class damage without need for an ability. On CHIMPS games, however, it will be very difficult to afford the M.A.D upgrade until at least Round 90 or so, so a cheap but effective defense with Rocket Storm is necessary before then.

Keeping its role as an expensive anti-MOAB upgrade, the M.A.D upgrade got a minor price reduction to make it more usable on CHIMPS scenarios, alongside a few minor quality-of-life changes. M.A.D. got nerfed in Version 26.0 by increasing cooldown for the Rocket Storm ability, and Version 29.0 directly nerfed M.A.D. for the first time by exchanging Boss Bloon optimality for CHIMPS practicality.

M.A.D in front view (only possible via hacking) 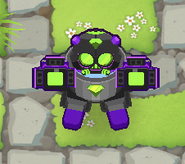 One of MAD's idle animations, featuring the robot looking up at the player

MAD's looking up animation from a side view, showing its tail and arms a bit more clearly

M.A.D, using its ability in the reveal trailer 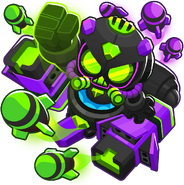 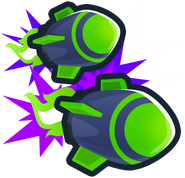 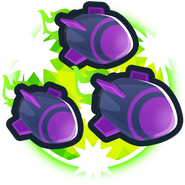 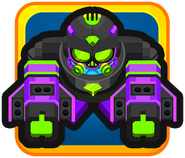