Bloons Wiki
Register
Don't have an account?
Sign In
Advertisement
in: Articles with red links, Articles in construction with a WIP, Articles that need more images,
and 7 more

80 (Circle Path, clockwise, around base)

Lots More Darts is the second upgrade for the Monkey Ace in Bloons TD 6. It allows the Monkey Ace to fire off 12 darts for each volley, four more than without the upgrade. When crosspathed with Spectres and Flying Fortresses, they receive +25% bonus pierce for each dart instead of bonus darts.

Lots More Darts can also receive the Centered Path targeting option when given the 2-0-2 crosspath.

In tandem with the prior Path 1 upgrade Rapid Fire, having Lots More Darts for general effectiveness is a must for the Monkey Ace, as it increases its greatest strengths while skirting some of its greater weaknesses. As a consequence of firing 12 darts, the angle between darts decreases from 45 degrees to only 30. This has the benefit of being able to hit bloons more consistently, even at further distances. It also allows for increased potential damage for close range bursts, as the chance for multiple darts to hit the same target would invariably increase. This is more noticeable for MOAB-Class or Ceramics, where an attack that lands all the darts within 90 degrees gains an extra hit for increased effectiveness.

Having more darts also benefits the other two Paths by a large margin. Having increased fire rate and more darts helps Path 2 stave off its overall lacking upgrades for increasing tower performance, as well as allow the Path 1 upgrades to benefit from Spy Plane's Camo detection. Path 3 has Sharper Darts, becoming a greater threat with increased pierce, fire rate and darts simultaneously. With Neva-Miss Targeting, having 33% more darts and faster firing speed is outright imperative to how well it benefits the upgrade.

So far, the only changes here are inherited buffs and nerfs based on its previous upgrade. 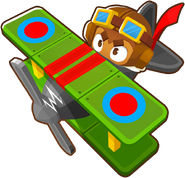 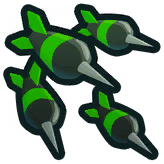