The sailor of a Monkey Sub with Longer Range gains a green cap with a private's emblem.

The Sub gains +10 range. For most Subs, total range is increased from 42 to 52. Ballistic Missile's range instead increases from 50 to 60.

A simple range upgrade for the Sub, and it can be used to let the Sub shoot at areas where a non-upgraded Sub could not.

Received a small range bonus buff. This has made a slight difference to the upgrade's viability on certain maps during the early-game. 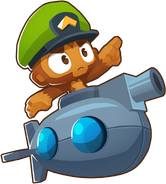 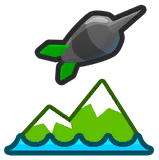