Long Reach is the first upgrade of Path 3 for the Spike Factory in Bloons TD 6. It increases the Spike Factory's range to cover an increased area from itself, gaining +8 range, spreading further along the track and potentially to other segments that were previously out of reach without assistance of the range enhancements, such as that from a Monkey Village. Additionally, since Version 21.0, it increases projectile lifespan of all its spikes from 50 seconds to 100 seconds, or +50% for Spike Storm ability spikes (30 seconds instead of 20 seconds).

The bottom half of the Spike Factory's body receives a blue paintwork.

Long Reach gains +8 range, and all newly dispensed spikes last for 100 seconds instead of 50 seconds. For Spike Storm and Carpet of Spikes abilities, they will last 50% longer, 15 and 30 seconds, respectively.

Long Reach defaults on Normal targeting priority, which dispenses the spikes onto nearby bloon track in a semi-sporadical behavior. If given Smart Spikes, it will also receive Close, Far, and Smart.

While it is a cheap upgrade, it is useful in only a few niche situations, spreading the damage out for a tower mostly centralized on single area blockage while only improving lifespan of its spikes as a bonus. The purchase of this path also has a disadvantage in the short-term of picking between Bigger Stacks and Faster Production. The Long Reach upgrade pairs well with Path 2 upgrades overall, as the benefits become more prominent with its succeeding Path 3 upgrade, Smart Spikes.

Since Long Reach arguably had almost no purpose outside of certain maps where the bonus range was necessary, and was even considered negative for the Spike Factory, Long Reach now additionally adds bonus projectile lifespan. This has made crosspathing with Path 3 a little more worthwhile, but not by a long shot. Long Reach also received an indirect buff in Version 22.0 as a result of a nerf to the base Spike Factory spike lifespan, from 70s to 50s. 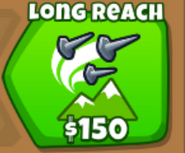 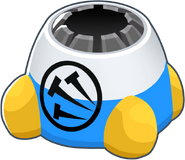 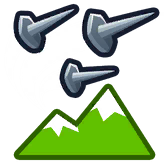