Long Range Rangs is the first upgrade of Path 3 for the Boomerang Monkey in Bloons TD 6. It increases range by 15%, or from 43 to 49.5 units, and allows the boomerangs to travel on a wider arc (it is the only way of extending the arc). Also increase Glaive Lord's orbiting glaives range from 30 to 34.5.

Like all Boomerang Monkeys, Long Range Rangs can access Change Hands secondary targeting priority to switch hands, changing the origin and direction of the boomerangs.

The following is a list of statistics of a Boomerang Monkey with Long Range Rangs. It includes its base statistics and all associated crosspathing interactions. Expand the box on the right to see further information.

The following are a list of wiki-written damage types associated by a Boomerang Monkey with Faster Throwing. These damage type statistics include how it attacks and how these attacks would affect bloons. Expand the box on the right to see further information.

With extra range and an extended arc, this upgrade can be helpful in certain maps where a specific increased arc range would help. However, Long Range Rangs is usually more of a stepping stone towards upgrades such as Red Hot Rangs.

Only affected by base Boomerang Monkey attack speed buff. 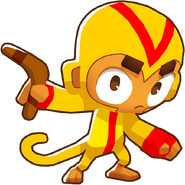 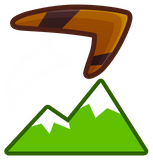