Long Life Bananas is the first upgrade on Path 2 for the Banana Farm in Bloons TD 5. This upgrade makes the bananas produced from the banana farm stay on the screen for 20 seconds instead of the usual 10 seconds (25 in all Mobile versions). It is useful for people who don't want to place their mouse over the Banana Farms all the time and for people that use Dartling Guns.

It also appears in BTD6 also as the first upgrade on Path 2. This upgrade turns the bananas green, making them last longer too, for 30 seconds instead of 15 seconds for normal bananas. It costs cheaper, at $255 on Easy, $300 on Medium, $325 on Hard, and $360 on Impoppable. 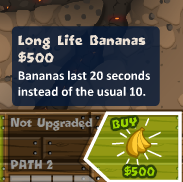 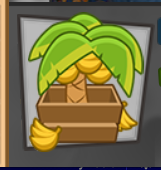 Crosspathing in BTD6 (Top: Path 1, Bottom: Path 3)
Add a photo to this gallery
Retrieved from "https://bloons.fandom.com/wiki/Long_Life_Bananas?oldid=242223"
Community content is available under CC-BY-SA unless otherwise noted.