Lightsabre Thrower is the final upgrade for the Boomerang Thrower in Bloons Tower Defense 4. It can pop up to 70 bloons before its lightsabre returns. The lightsabre is also capable of popping Lead Bloons. This upgrade is good for swarms of bloons because it can pop many of them. The thrown lightsabres spin as they move, chopping up bloons on each side that contact the blades. 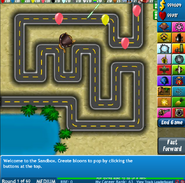 The Lightsabre Thrower in action in BTD4

Upgrade Description and Icon
Add a photo to this gallery

Retrieved from "https://bloons.fandom.com/wiki/Lightsabre_Thrower?oldid=268413"
Community content is available under CC-BY-SA unless otherwise noted.