Lightning Bolt is the second upgrade on path 1 for the Monkey Apprentice in Bloons TD 5. It costs $1020 on Easy, $1200 on Medium, $1295 on Hard, and $1440 on Impoppable. This upgrade has the most popping power of all the cheap upgrades of the Monkey Apprentice, with a popping power of up to 25 bloons. The lightning bolt can also go out of the range of the Monkey Apprentice. It is a commonly used upgrade during the earlier rounds for its popping capabilities and if upgraded to Monkey Sense, it can take care of weak Camo Bloons, but stronger Camo Bloons (e.g. Camo Ceramics, Regrow Camos) would require far more popping power. Do note that the lighning bolt only pops one layer of bloon at most. 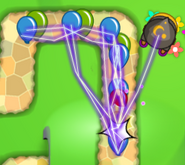 Lightning firing on many nearby bloons

Retrieved from "https://bloons.fandom.com/wiki/Lightning_Bolt?oldid=231648"
Community content is available under CC-BY-SA unless otherwise noted.