Legend of the Night is the last upgrade on the third path for the Super Monkey in Bloons TD 6. It gains a passive ability that summons a black hole at the end of the track if any bloon (including all M.O.A.B. Class Bloons, even B.A.D.s) escapes. The black hole ability absorbs the first bloons that leak and prevents the player from losing any lives for 7.5 seconds before disappearing, and it has a long cooldown of 2 minutes. The tower also becomes much stronger with a slightly longer range, +15 pierce, from 7 to 22, base damage increased by 3, from 2 to 5 and dealing 8 damage per hit to M.O.A.B. Class Bloon. 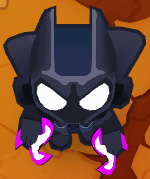 Legend of the Night with Plasma Blasts upgrade

Legend of the Night with Laser Blasts upgrade (Note that the LOTN appearance did not change, only the blade colour changed)

Retrieved from "https://bloons.fandom.com/wiki/Legend_of_the_Night?oldid=239487"
Community content is available under CC-BY-SA unless otherwise noted.