Bloons Wiki
Register
Don't have an account?
Sign In
Advertisement
in: Pages with broken file links, Articles in construction, Bloons,
and 16 more

They move at the speed of Red Bloons and M.O.A.Bs. Being the only metallic "Bloon" not counting the D.D.T in the BTD series, Lead Bloons are very easy to tell apart from other Bloons. Popping a Lead Bloon and its descendants rewards a total of 19 Money in BTD2 and BTD3 or 23 Money since BTD4. They contain 2 Black Bloons. Also, in BTD6, they can appear as fortified versions, gaining 3 HP (26 RBE).

The Lead Bloon is one rank above Black Bloon in Bloons TD games, on the same tier as a Zebra Bloon. It is as fast as a Red Bloon and leaks 23 lives (or 19 pre-BTD4) if it reaches the exit. As per the multi-layer health system, a popped Lead Bloon splits into two Black Bloons when affected by an attack that deals 1 damage. More damage pops the Leads Bloon into its descendents, following the multi-layer health system of many bloons in the game. Unlike most bloons, the Lead Bloon has no parent, except Bloonarius the Inflator during Boss Events.

In Bloons TD games and Bloons Pop!, the Lead Bloon is immune to all sharp attacks without special upgrades or support. This is especially problematic for towers such as Dart Monkeys and Tack Shooters, which naturally are weak to these bloon types without accessing powerful higher-tier upgrades. Further discussion on the Lead Bloon's immunities are listed under #Immunity.

Lead Bloons have not been buffed or nerfed much, but one minor change involves making Lead Bloons move slightly faster than a Red Bloon. 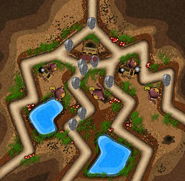 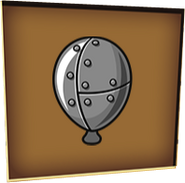 It is indestructible against physical attacks.

A group of Lead Bloons in Bloons Tower Defense 3