Laser Cannon is the third upgrade of Path 1 for the Dartling Gunner in Bloons TD 6.

The Laser Cannon increases its pierce from 1 to 4 (6 with Powerful Darts), pops 2 layers, and converts the main attack to the energy damage type (can pop Frozen Bloons but can no longer pop Purple Bloons without support). In addition, the Laser Shock effect lasts for 2 seconds instead of just 1 second. Random projectile deviation remains at 8° each side.

Laser Cannon is suitable as an early mid-game option due to its decent stats and infinite range. It functions best on maps with straight lines so it can miss less. Try to keep in mind the fact that it is relatively weak early game as a low tier Dartling Gunner. It is used as a good stepping stone to Plasma Accelerator. 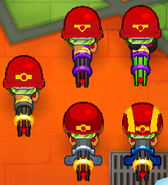 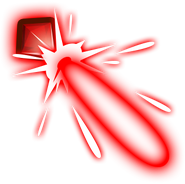