Laser Cannon (BTD4-BTD5) is the final upgrade for the Dartling Gun in Bloons TD 4 and the third upgrade in the first path for the Dartling Gun in Bloons TD 5. In BTD4, this upgrade is unlocked at rank 33. The upgrade gives the monkey a red jumpsuit and increases its attack speed by 15%, as well as making the tower shoot laser beams instead of darts. Each beam can pop 13 bloons. Beams from this tower can also pop frozen bloons.

In terms of firepower, two of these are roughly equal to a Sun God in Bloons TD 4. The advantage comes with unlimited range; Laser Cannon's firepower can be pinpointed anywhere in the map. It is also cheaper than a Sun God and fires nearly as fast.

In Bloons TD 5, this upgrade is much stronger than its predecessor upgrade, Faster Barrel Spin, being able to pop up to 13 bloons, including bloons that have been frozen, even though it still cannot pop lead bloons without Depleted Bloontonium Darts. Compared to its oppositely pathed upgrade, Hydra Rocket Pods, it is suited best shooting along the path, in order to utilise the 13 popping power. This can be able to pop Zebras and Rainbow rushes easily and can take down Ceramics if paired with other towers.

It is also recommended to use this at regular speed to take advantage of its accurate mouse following. 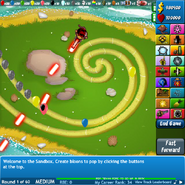 Laser Cannon in BTD4 popping Leads on its own

The way laser shots from a laser cannon are fired.

The Laser Cannon icon in BTD5

A Laser Cannon in Bloons TD 5.

Laser Cannon (3/2) and Hydra Rocket Pods (2/3) together. Their relative fire rates can be compared.

Retrieved from "https://bloons.fandom.com/wiki/Laser_Cannon_(BTD4-BTD5)?oldid=271656"
Community content is available under CC-BY-SA unless otherwise noted.