Laser Blasts returns as the 1st upgrade of Path 1 for the Super Monkey in BTD6. Just like the old Laser Vision upgrade from earlier games and BTD5's Laser Blasts, Laser Blasts makes the Super Monkey shoot lasers instead of darts, but neither this upgrade nor its successor Plasma Blasts upgrade can pop Purple Bloons without special upgrades. Pierce of each laser is increased by +1, from 1 to 2. As with earlier versions, this upgrade allows popping of Frozen Bloons but still not Lead Bloons, because its projectile changes from the sharp type to the energy type.

Laser Blasts increases pierce of the Super Monkey by a considerable amount, and it allows the Super Monkey to pop Frozen Bloons. However, the cost-efficiency of Epic Range at providing both range and pierce often renders the lone Laser Blasts upgrade less useful, with the only exception being if planning to further upgrade to Plasma Blasts or wanting to add a crosspath with Knockback. 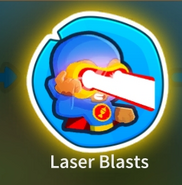 Insta-Monkey
Add a photo to this gallery

Retrieved from "https://bloons.fandom.com/wiki/Laser_Blasts_(BTD6)?oldid=274870"
Community content is available under CC-BY-SA unless otherwise noted.