Large Calibre is the second upgrade of Path 1 for the Sniper Monkey in Bloons TD 6. It allows the Sniper to deal 7 damage to bloons per shot instead of 4, enough to pop an entire Zebra Bloon or Lead Bloon, and can turn an entire Rainbow Bloon into 8 Red Bloons. When crosspathed with Shrapnel Shot, shrapnel pieces deal 2 damage instead of 1.

The Sniper with Large Calibre's beret changes from red to purple, and gains a grey vest.

When pairing it with Path 3 upgrades, the beret will be colored purple on one side plus grey/orange (depending on upgrade) on the other side. Semi-Automatic will add a pair of earmuffs to the Sniper Monkey on top of the aforementioned changes. Full Auto Rifle turns the helmet of the Full Auto Rifle to purple.

Large Calibre allows the Sniper Monkey to pop 7 damage to bloons per shot instead of 4. One single shot is enough to wipe out an entire Zebra Bloon or Lead Bloon, and can turn an entire Rainbow Bloon into 8 Red Bloons. If crosspathed with Shrapnel Shot, the shrapnel pieces deal 2 damage instead of 1. Bouncing Bullet maximum bounce distance increases from 40 to 50, and Elite Defender's MOAB-class damage bonus is increased from +3 to +4 when compared to an Elite Defender with Full Metal Jacket.

Can receive Camo Prioritization with Night Vision Goggles, allowing it to prioritize Camo Bloons over other types when active.

The Large Calibre upgrade is a straightforward damage buff upgrade intended mostly for breaking down many layers of each weaker bloon in a single shot rather than pure extra DPS, although the same upgrade serves as a highly beneficial upgrade to the Sniper's pure DPS when paired with any of the Sniper's higher upgrades. Like most Path 1 Sniper upgrades, Large Calibre benefits the most from the increased attack speed that the entirety of Path 3 provides, allowing its high damage output to be fully utilized. The same upgrade is also helpful for Upper Path 2 upgrades such as Bouncing Bullet or Elite Sniper to more reliably pop multiple dense groups of bloons.

Large Calibre initially made little impact for Path 2 crosspathing, but later updates have buffed its interaction with crosspathing, including a base Sniper attack speed buff to compete over Path 3 crosspathing. 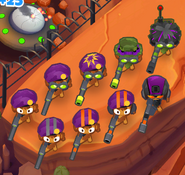 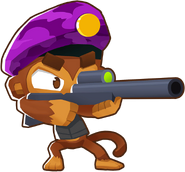 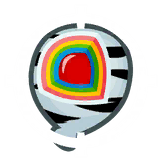