The monkey for Kylie Boomerang replaces its red jumpsuit (from Red Hot Rangs) with an Australian outback outfit. For this outfit, the monkey wears a beige leather hat with a brown band decorated with crocodile-like teeth around it, as well as an open sleeveless shirt and a necklace of what appears to be a crocodile tooth. The monkey's dominant hand wears a brown leather glove. The boomerang appears to be no longer red hot, and is now a heavy kylie boomerang. On the official upgrade portrait, the Kylie Boomerang monkey appears to be happy.

Crosspathing with path 1 dyes the band on its hat red, then cyan, as well as adding sharp curved blades to the end of the boomerang.

Crosspathing with path 2 adds 1 or 2 red stripes to its hat.

Kylie Boomerang increases the boomerang pierce to 18, and adds the ability for them to deal Contact Damage

, allowing them to hit the same bloon multiple times every 0.3 seconds per remaining available pierce.

To aid this, its boomerangs now follow Straight Movement

, and linger at the edge of their range for a short time before returning.

Like all Boomerang Monkeys, Kylie Boomerang can access Change Hands secondary targeting priority to switch hands, changing the origin and direction of the boomerangs.

The following is a list of statistics of a Boomerang Monkey with Kylie Boomerang. It includes its base statistics and all associated crosspathing interactions. Expand the box on the right to see further information.

The following are a list of wiki-written damage types associated by a Boomerang Monkey with Kylie Boomerang. These damage type statistics include how it attacks and how these attacks would affect bloons. Expand the box on the right to see further information.

Minuscule changes for Kylie Boomerang, although in Version 7.0 the +1 damage buff was carried over to its preceding Red Hot Rangs upgrade instead. 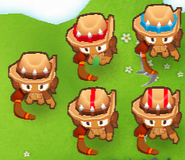 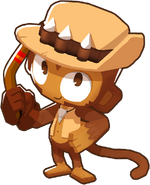 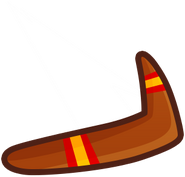