Knockback is the first upgrade of Path 3 for the Super Monkey in Bloons TD 6. It adds knockback to every attack, allowing Super Monkey projectiles to push back or slow down bloons with each hit. It will push back non-Lead and non-Ceramic bloons by 25%, and slow down Leads and Ceramics (including their fortified variants) by 60%. MOABs are slowed by 30% (except the BAD, which cannot be slowed at all). The knockback effect lasts for 0.1s per hit.

This upgrade adds a yellow stripe on Super Monkey's head.

This upgrade causes all attacks by the Super to inflict knockback for 0.1 seconds, pushing normal bloons back at 25% speed, slowing leads and ceramics by 60%, and slowing MOABs by 30%.

Appears to be nerfed in attempt to balance out Path 3 crosspathing, more specifically with Sun Avatar. 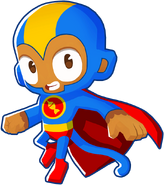 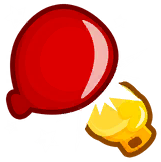