Jungle Drums is the second upgrade of Path 1 for the Monkey Village in Bloons TD 6. It grants +17.6%~ attack speed to all nearby towers (equivalent to applying a 0.85x attack cooldown).

Jungle Drums adds a pair of bongos on the player's left side. The bongos have white-colored drum skins and red bases. Crosspaths up to Tier 4 have the bongos.

Adds a buff that gives a 0.85x attack cooldown to all towers in range.

Jungle Drums supports nearby towers with influential tower buffs. However, for simplicity reasons, Jungle Drums has no targeting priorities.

Jungle Drums provides a decent attack speed increase to all towers in range for a fair price. It is especially useful where there are large groups of attacking towers and/or towers that benefit most from attack speed increases. There is essentially never diminishing returns for a multiplicative attack speed buff, so its buff is still universal and can be used in most situations.

No changes were made to Jungle Drums since it was first released in BTD6. 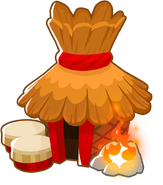 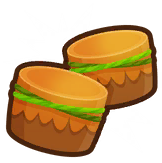