Jungle's Bounty is the fourth upgrade on Path 2 of the Druid in Bloons TD 6. It grants an activated ability that generates $240 extra cash plus $120 more per Banana Farm within its range. In addition to this, it gains a substantial range increase from 35 to 45 and now activates two vine attacks at a time.

There is an initial cooldown of 60 seconds prior to the initial activation, along with a 60 second cooldown for the tower after each activation of the ability. Additionally, each Jungle's Bounty Druid can only use its ability up to 3 times per round, or 3 minutes from when the round elapsed, whichever comes first. Because of its long range, Jungle's Bounty on most maps can reach approximately 4-6 Farms at max within base range, and its ability coverage can be increased with range bonuses such as Druidic Reach, Monkey Village etc and Heroes Level 5+ Obyn Greenfoot or Geraldo's See Invisibility Potion.

Jungle's Bounty exchanges the Druid of the Jungle's cloak for a beige-colored cloak and a leafy cape. The Druid's olive-colored wreath has much noticeably larger features, made from a thicker branch and decorated with larger leaves. With this upgrade, the Druid's pupils literally become curves in a concave down shape, most likely implying eternal joy.

On the upgrade portrait, the Jungle's Bounty appears to be joyful at the fruitful harvest of bananas and oranges, implied to be from a summoned blessing from nature. The Druid also sits on a branch.

As a bonus, Jungle's Bounty improves its global range vine attack, which ignores line-of-sight, by adding a second simultaneous vine. Every 1.4 seconds minimum, the strongest visible bloon on screen up to Ceramic is ensnared and effectively instakilled. Like Druid of the Jungle, its previous upgrade, a thorny vine is then left on the track for 4.5 seconds, which damages bloons on contact, including Lead and Frozen. Both vines must be off cooldown before they can trigger again.

The Druid cannot cast another vine until the initial targets are fully popped; bloons with more layers take longer to breakdown. The simultaneous vine attacks are locked to Strong targeting and is unaffected by attack speed buffs. The tower spends (√rbe + 2 (if the bloon is lead) + 1)/4 seconds destroying a bloon, with the base cooldown being 1.4s.

The simultaneous vine attacks are locked on Strong.

This is the special ability for the Tier 4 Druid, Jungle's Bounty. The ability instantly generates $240 plus +$120 more cash per Banana Farm within range. Cooldown of 60 seconds.

Surrounding Jungle's Bounty Druids with Banana Farms can be one of the fastest options for generating money. Jungle's Bounty is perfectly effective with only basic Farms, but really shines when combined with the extremely efficient profit generation of Monkey Banks. On many maps and difficulties, other money farming options are preferable to Jungle's Bounty, as they can provide all the money needed for victory with a quicker and simpler setup. However, Jungle's Bounty becomes a popular choice when extreme amounts of money are required for success - particularly in Boss Bloon Events.

Jungle's Bounty was buffed in Version 2.0 to give more use for this upgrade at producing income. However, its Jungle's Bounty ability was nerfed overall in Version 16.0 due to being the dominant income production method outside of Monkey Bank spam.

Version 28.0 nerfed Jungle's Bounty's income-generating function in exchange for a superior damage. In effect, it has made it almost impossible to stall with Regrow Farming with Druid farming, but greatly saves money in normal scenarios due to having much more reliable bloon-popping power. 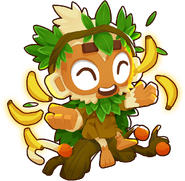 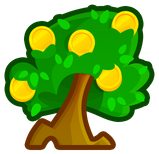 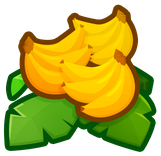