Juggernaut Max is monkey Hero in Bloons Adventure Time TD, and is a variation of Max who uses a giant ballista/crossbow machine. He is unlocked if you beat the Cyclops adventure in Grasslands. He costs $700 to place and is using Dart weapons in his arsenal. His attacks' also have one of the highest pierce values in the game without additional benefits from items and weapons.

^Juggernaut Max can only have one combo upgrade at a time.

Juggernaut Max will receive the following permanent boosts as he levels up:

When MOAB-class bloons are popped:

Juggernaut Max has the highest pierce of any tower in the game. Because of this, he has excellent synergy with characters and upgrades that can slow down Bloons or add additional benefits. It's usually ideal to have him partnered up with the characters that can enhance his Juggernaut attack, even if you don't purchase the upgrade specific to that character. For example, upgrading Juggernaut Max to Great Balls of Fire and having him near Ice King with Winter Weather can be an effective combination. Juggernaut Max's biggest weakness is his attack speed. This can make him less effective at damaging MOAB class Bloons, similar to Dart Monkey's upgraded to Spike-O-Pult and/or Juggernaut. If you want to pop MOABs, don't use him unless you wish to pop the MOAB's children. When choosing a weapon and trinkets, it is best to select items that increase his damage output and speed, rather than his pierce. He can easily deal with MOABs with keep rolling as it does 150 damage against M.O.A.B. Class Bloons. If you dont have level 5, you can use Great balls of fire against MOABs. Stack speed with the keep rolling upgrade 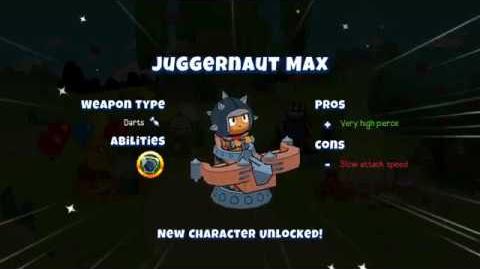 Retrieved from "https://bloons.fandom.com/wiki/Juggernaut_Max?oldid=269042"
Community content is available under CC-BY-SA unless otherwise noted.