Knockback (Knocks back most non-MOAB class bloons by 0.1s)

Juggernaut is the fourth upgrade of Path 1 for the Dart Monkey in Bloons TD 6. It deals 2 damage (+3 to Ceramics), as well as popping Frozen and Lead Bloons. Juggernaut balls each have 50 pierce (51 with "Extra Dart Pops" MK). It also increases the tower's range by 15% or 4.5 units and the attack speed from per 1.15s to 1s. Juggernauts additionally have greater projectile speed and a larger projectile size compared to its preceding Spike-o-pult upgrade. Juggernaut balls also inflict a speed-based knockback for 0.1s, functioning similarly to Buckshot.

This upgrade causes the catapult to upgrade into an onager inspired by Ancient Roman engineering, a medieval theme, and is made mostly of stone instead of wood, and has its wheels painted yellow. Black spiked balls are replaced by much larger spiked balls, colored black with large grey tips and yellow rims around the pointy extrusions. The Juggernaut catapult also receives two yellow shields attached to each of the front frames of the catapult. When attacking, the operator monkey launches the catapult each time, and after each shot constantly reloads the balls by hand.

Juggernaut improves the spiked ball of its previous upgrade, giving it +1 base damage (2) and +2 additional damage to Ceramics, (5 total) as well as granting it a total of 50 pierce. The ball is also Normal type, able to pop any type of bloon, but still does not pop camo. Additionally, range increases by 4.5 units, to 36.5, and attack speed increases as well, from an attack cooldown of 1.15 seconds to 0.95 seconds. Juggernauts also inflict a knockback equivalent to Buckshot for 0.1s on affected bloons.

The following is a list of statistics of a Juggernaut. It includes its base statistics and all associated crosspathing interactions. Expand the box on the right to see further information.

Juggernaut is a decent option for dealing high Ceramic damage along straight lines. It also serves as the Dart Monkey's cheapest lead-popping option compared to getting Crossbow Master or Plasma Monkey Fan Club. However, the combined increased price tag plus the existence of alternate good anti-Ceramic options, Juggernaut struggle to outcompete cost-efficiency at handling Ceramic Bloons. Juggernaut projectiles do move pretty quickly, have large hitboxes, and bounce off obstacles, making it work well against both straight lines and within areas with lots of obstacles.

Juggernaut originally had a special niche of providing very high popping power along straight lines, perfectly viable for Race Events, but has since been adjusted to become more practical as general grouped damage option. This was because newer players generally found this upgrade to be too niche or even underpowered, according to Ninja Kiwi. It has also been further buffed to add specialization against Ceramics in both damage and an additional knockback.

In general, it was buffed overall in general cases but nerfed overall under Race Events scenarios.

Range of a base Juggernaut

Juggernaut bouncing off an obstacle 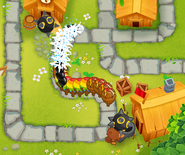 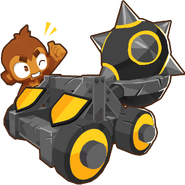 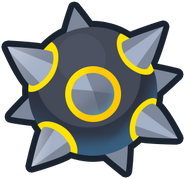