First, Last, Close, Strong
If purchased, Wall of Fire will default to Close.

Intense Magic is the first upgrade on the third path for the Wizard Monkey in Bloons TD 6. It gives the Wizard +5 pierce to each bolt, giving a total of 8 pierce for each normal bolt attack (7 to 12 for Arcane Mastery, and 11 to 16 for Archmage). In addition, projectile speed for all bolt attacks is doubled. Currently, Intense Magic also increases the pierce of all fire-related attacks except the Phoenix and Lava Phoenix subtowers. For Wall of Fire, it gains +4 pierce, Dragon's Breath flames gain +2 pierce, and Fireball gains +5 pierce.

Intense Magic gives the Wizard Monkey a color change of the celestial patterns on its hat from yellow to purple.

Monkey Sense can access Camo Prioritization, allowing all its attacks to prioritize Camo Bloons over other types when this secondary targeting option is active.

Intense Magic improves overall pierce of the Wizard Monkey, and it is usually bought as either a grouped popping option for early-game or as a crosspath to higher level Wizards.

If crosspathed with Guided Magic the bolts travel faster but its seeking curve becomes much larger. 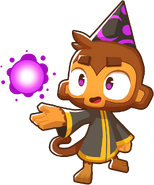 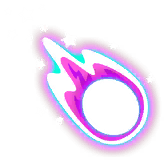