In BTD6, this upgrade is the first upgrade on Path 3. It gives +5 pierce to each bolt, giving a total of 7 pierce for each normal bolt attack (6 to 11 for Arcane Mastery, and 10 to 15 for Archmage). In addition, projectile speed for all bolt attacks are increased. Currently, Intense Magic does not affect any other magical attack (Fireballs, Walls of Fire, Dragon's Breath, Summon Phoenix, Shimmer, Undead Bloons or Undead MOAB and Undead BFBs). 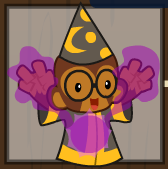 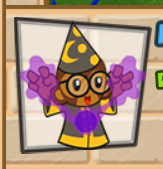 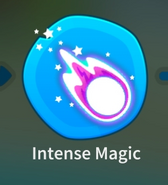 Retrieved from "https://bloons.fandom.com/wiki/Intense_Magic?oldid=239543"
Community content is available under CC-BY-SA unless otherwise noted.