Inferno Ring is the final upgrade on the first path for the Tack Shooter in Bloons TD 6. It creates an endless fire ring and increases the range of the Tack Shooter as well. It deals 4 damage per 0.1 seconds to all bloons (excluding Camo Bloons) inside the ring, plus an extra +6 damage against MOAB-class bloons. Although the Inferno Ring is devastating against most bloons, it cannot pop Purple Bloons. Additionally, every 4 seconds, it shoots a meteor at the strongest bloon on screen (despite being locked on Close targeting), dealing 700 damage. It costs $42,500 on Easy, $50,000 on Medium, $54,000 on Hard and $60,000 on Impoppable. 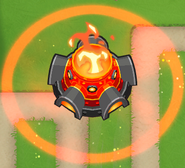 Instamonkey icon for Inferno Ring
Add a photo to this gallery

Retrieved from "https://bloons.fandom.com/wiki/Inferno_Ring?oldid=239478"
Community content is available under CC-BY-SA unless otherwise noted.