No (can detect camo and decamo with x-x-3)

Increased Accuracy is the first upgrade of Path 3 for the Mortar Monkey in Bloons TD 6. It shrinks the size of the target reticle and allows the Mortar Monkey to direct its fire more accurately. With this upgrade, the explosion deviation decreases from 18 to 8, for roughly 2.25x more accuracy.

The Mortar Monkey gains a headset and a helmet-held speaker. Nothing else changes in terms of visual changes.

The following is a list of statistics of a Mortar Monkey with Increased Accuracy. It includes its base statistics and all associated crosspathing interactions.

The following are a list of wiki-written damage types associated by a Mortar Monkey with Increased Accuracy. These damage type statistics include how it attacks and how these attacks would affect bloons. Expand the box on the right to see further information.

Increased Accuracy makes the Mortar Monkey's shots more consistently at where the Mortar Monkey is targeted at. This may be useful for specific scenarios where random projectile deviation is detrimental. In normal games however, getting Faster Reload or Bigger Blast and their upgrades as crosspaths is usually better.

Adjustments primarily made for encouraging crosspathing other than Path 2. 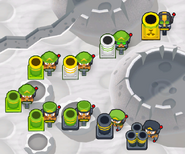 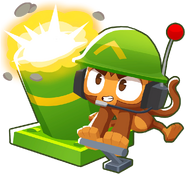 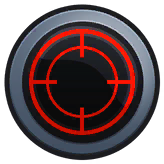