Improved Rangs is the first upgrade of Path 1 for the Boomerang Monkey in Bloons TD 6. It increases pierce of boomerangs by +4, or +100 for MOAB Press special kylies. It can be unlocked for 100 XP.

This upgrade replaces the "V" shape on the top of the Boomerang's jumpsuit with an "X".

Increases pierce of boomerangs by 4. For most boomerangs, this increases pierce of each boomerang from 4 to 8, while pierce of Kylie Boomerang's kylies each increase from 18 to 22. For MOAB Press's special kylies, they gain +100 pierce, from 200 to 300. It has no benefit for MOAB Domination's explosions.

Like all Boomerang Monkeys, Improved Rangs can access Change Hands secondary targeting priority to switch hands, changing the origin and direction of the boomerangs.

The following is a list of statistics of a Boomerang Monkey with Improved Rangs. It includes its base statistics and all associated crosspathing interactions. Expand the box on the right to see further information.

Improved Rangs greatly improves the pierce of the Boomerang Monkey, from 4 to 8. Use it for combating grouped bloons, especially during the early game.

Most higher-level upgrades would appreciate this upgrade as a stepping stone to the Glaives upgrade crosspath. For Bionic Boomer and above, this upgrade is usually the preferred crosspath. For Kylie Boomerang, it depends, but generally the main attack works better with the attack speed from the middle crosspath while the special rang prefers the additional pierce and push distance from this crosspath. General use case for MOAB Press without further upgrading into Glaives is mostly just increased pierce if needing to budget money very tightly.

Only affected by base Boomerang Monkey attack speed buff. 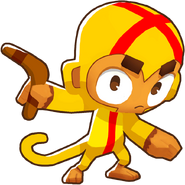 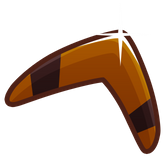