Icicles is the Tier 4 upgrade on Path 3 for the Ice Monkey in Bloons TD 6. With this upgrade, any Bloons frozen by the Ice Monkey to grow icicles. These icicles deal two damage at any Bloon that touches them, and pierce up to 3 bloons. The icicle planted status effect lasts for up to ~2 seconds. Inheriting the properties of Cryo Cannon, its ice blasts deal 2 layers of damage too.

The icicles that form on bloons are considered the shatter type, allowing the popping of White Bloons, Zebra Bloons, and Frozen Bloons but not Lead Bloons unless crosspathed with Cold Snap upgrade. Icicles are also grown on Bloons that Ice Monkey cannot normally freeze such as White and Zebra Bloons, but not Lead Bloons. Grown icicles can pop Leads if the originating tower had lead-popping by any source at the time of shooting a snowball.

This upgrade removes its sunglasses, grey earmuffs, gloves, and wristband, and replaces them with an helmet encased in ice with a fin on top. Its right arm projectile launcher is overall much larger. It now wears blue shoes. In the upgrade portrait, the Ice Monkey's left arm is completely iced, but the in-game model's arm is not; only its left hand is blue.

Icicles can be used to improve mid-game potential while saving up for Icicle Impale. It is best used as a cleanup option in combination with other towers. Combined with the powerful ice blasts and icicles, this tower can deal quite good chunk amount of damage to bloons overall.

Icicles has been buffed overall since it was first released. Just like with Cryo Cannon, its previous upgrade, Ninja Kiwi had made them both stronger at damage, with intention of transforming them into hybrid damage + freeze towers. 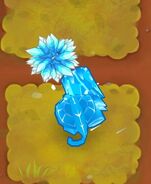 Many bloons in a clump affected by Icicles

Creating ice blasts onto groups of bloons, with some Whites left intact with the status effect 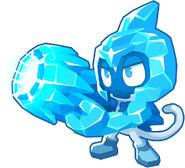 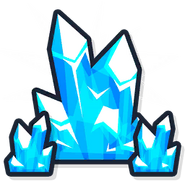 Icicles as seen in the BTD6 start screen