Icicle Impale is the final upgrade of Path 3 for the Ice Monkey in Bloons TD 6. The Ice Monkey's snowballs can now target and damage MOAB-class bloons, dealing 50 damage to each and freezing them. Frozen MOABs and BFBs move at the base speed of a ZOMG, and frozen ZOMGs are slowed by 50%; BADs can be frozen but will not be slowed down. This unique slowdown versus non-ZOMG blimps becomes far more apparent on higher rounds.

Icicle Impale also allows the snowballs to directly pop White and Zebra Bloons. Additionally, the Ice Monkey now attacks 33% faster (or 0.75x attack cooldown reduction), increasing its default firing rate from per 1.0s to per 0.75s. Crosspathing with Permafrost also applies a permanent 25% slowdown to the outer layer of any affected MOAB-class bloons.

This upgrade greatly increases the length of the projectile launcher, adds a protruding triangular spike from the end, and the Ice Monkey now holds the launcher like a shoulder-fired missile. Feather-like protrusions of ice stick out of the top of the helmet. The upgrade portrait shows the launcher held over the left shoulder, while the in-game model holds it over the right shoulder. Similarly like Icicles, the Ice Monkey's right arm in the upgrade portrait, is completely iced, but the in-game model's arm is not; only its left hand is blue.

Icicle Impale holds a unique place as a tower that solos DDTs and does very good damage to blimps in general. It also clumps up bloons, which may be useful to help certain towers fully utilize their pierce. 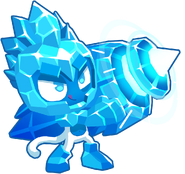 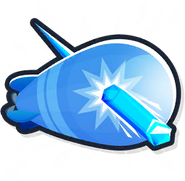